In late February of 1692, Reverend Samuel Parris called in a doctor to examine his 9-year-old daughter, Betty, and eleven-year-old niece, Abigail Williams who were suffering from “spontaneous fits.” The children were subsequently diagnosed as victims of witchcraft setting off an outbreak of panic which would sweep throughout Salem Village and become one of the most studied and provocative periods in American history.

The Witch (2015) is a historical period supernatural horror film written and directed by Robert Eggers that depicts the trials of Thomasin and her family upon their banishment from a Puritan plantation in 1600’s New England. 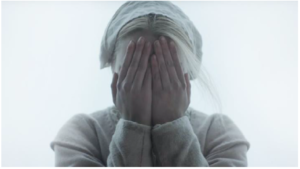 What is wrong with this picture?

After building a farm by the edge of a large, secluded forest far from the Puritan settlement, Thomasin is caring for her newborn brother, Samuel, when she plays Peek-a-Boo. The game is an exercise in object permanence: the ability of a child (Samuel) to understand that objects exist even if they cannot be seen. In his theory of cognitive development, Jean Piaget believed that infants develop this understanding by the end of the sensorimotor stage. Object permanence is accomplished by placing one’s hand’s over the child’s eyes. In the film, Thomasin (shown) “loses her brother” when she places her hands over her own eyes, thus demonstrating profound deficits in cognitive functioning that is developmentally inappropriate (teenager).

At Rutgers Robert Wood Johnson Medical School, the first module – titled Necromancy – of our year-long resident Psychopathology course incorporates ghosts (wraiths) and demons. While the former references disorders that are episodic in nature, tales of demonic possession serve to reinforce teaching points of chronic and persistent illnesses such as the Dissociative Disorders (DD). At the completion of the DD block, participants should appreciate that movies about demonic possession may be metaphorically interpreted as case studies of dissociation. Given the widely-held belief that a witch is a woman who had coitus with the devil, tales of witches may be viewed as accounts of demonic possession. Accordingly, the hallmark characteristic of Dissociative Identity Disorder, a disruption of identity, may be described in some cultures as an experience of possession (DSM-5).

Thomasin experiences a disruption of identity, thus allowing The Witch is be viewed as a fictional case account of Dissociative Identity Disorder (DID). Might this formulation actually explain the origins of the “hysteria” in 1692 Salem? Focusing on the biological antecedents (biopsychosocial), ergotism may have played a role in the events leading up to the Salem Witch trials (Caporael L, Science, vol. 192 http://homepages.rpi.edu/~caporl/home/Notes_files/Satan%20Loosed.pdf). Before concluding that DID is the most likely diagnosis, we much first investigate whether Thomasin’s mental status change is not otherwise due to the direct physiologic effects of a substance.

Ergotism is a plant disease that is caused by the consumption of grain contaminated with ergot which is produced by the fungus Claviceps purpurea. Poisoning attributed to Ergot of Rye is referred to as ergotism. Although this fungus is recognized as one species, there are two sets of symptoms: convulsive and gangrenous ergotism (http://www.botany.hawaii.edu/faculty/wong/BOT135/LECT12.HTM).

The clinical features of convulsive ergotism including muscle spasms, mental status changes, hallucinations, sweating, and fever are consistent with the serotonin syndrome. Ergot alkaloids such as dihydroergotamine are serotonin agonists; molecules that bind to serotonin receptors in the brain (mental status changes) and dorsal horn of the spinal cord. (Eadie MJ, Convulsive ergotism: epidemics of the serotonin syndrome?, Lancet Neurol. 2003 Jul; 2(7): 429-34).