Home / Psychiatry Through the Horror Genre / 52in52 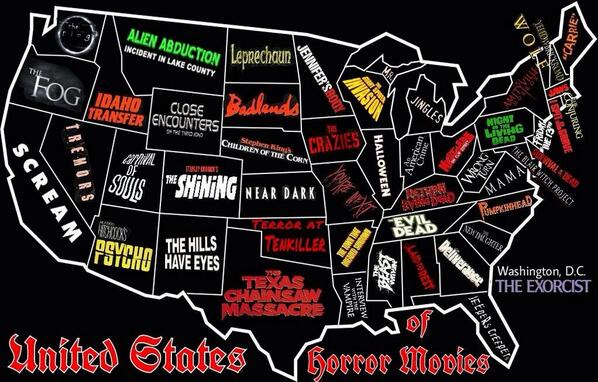 Innovations in Teaching: 52in52
52in52 is a year-long didactic at Rutgers-Robert Wood Johnson Medical School directed by Anthony Tobia, MD in the Department of Psychiatry. The goal of the didactic is to increase Medical Knowledge of psychopathology and related issues in psychiatry through the use of film.

52in52 iCollaborative Collection
When Bruce Campbell retweeted the United States of Horror Movies map, little could he have known of the impact he’d have on medical education. With the commencement of the new academic year, medical students, residents and faculty at Rutgers’ RWJMS will be taking a virtual road trip across the United States, using @GroovyBruce’s map as a guide. We’ll start out in Maine and end in California. In planning our road trip, we made sure to be in Illinois the week of Halloween and in the great Garden State of NJ for the week of February (Friday the) 13! We’ll take 2 ferry rides and flights to and from Hawaii; otherwise, every state we pass through is accessible by car (i.e. no skipping over states). Since we’ll pass through Washington D.C. and Canada, we’ll have a total of 52 destinations.

Beginning the week of July 1, we’ll “visit” one state each week as listed in PDF Documentour itinerary and watch the movie assigned to that state. At the end of each week, we’ll post a blog of our travels that illustrates how the movie relates to germane teaching points in Psychiatry. Just like evil clowns piling out of a VW beetle, there’s always room for one more; if you want to come along, follow us on Twitter @ATobiaMD.

Innovative Teaching in the Department of Psychiatry at Rutgers-RWJMS: 52in52
Clicking on the above itinerary link will guide you along our virtual road trip from Maine to California. In addition, there are several other resident didactics and student courses taught using media and film at Rutgers-RWJMS. The seminal course ‘Reviewing (Mental) Disorders with a Reverent Understanding of the Macabre (REDRUM)’ is the psychiatry residents’ psychopathology seminar that has been previously described (Academic Psychiatry, March-April 2013) External Link. From REDRUM, we’ve expanded to include multiple centers, social media, and patient-centered celebrities.