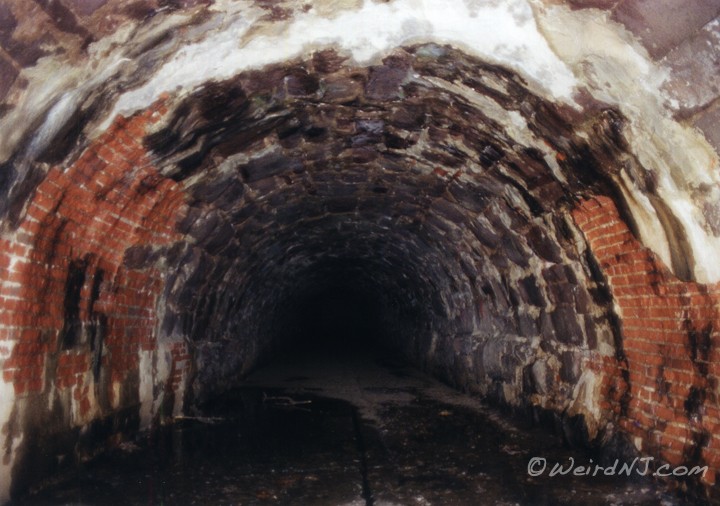 Built as a drainage run-off for Weasel Brook, the Gates of Hell is a tunnel system that has lured and captivated teenagers who have dared to explore what lay deep inside its darkened corridors (http://weirdnj.com/stories/gates-of-hell/).

Set in the town of Derry, Maine in the 1950’s, Stephen King’s miniseries It depicts a supernatural character, Pennywise the Dancing Clown, that terrorizes a childhood group of friends, the “Losers Club.” Pennywise pulls Georgie to his demise after his paper boat floats into the sewer system deep under the town of Derry. The death of Georgie traumatizes the group and, under his brother’s guidance, they vow to avenge his death and all those devoured by It.

When they hear about a mysterious, unexplained death of a little girl who was brutally murdered 30 years later in Derry, Bill begins to suspect It has returned. They honor their blood pact even if it means re-experiencing their childhood trauma. Stan, the only club member with recall of the events from his childhood, commits suicide, writing the word “IT” on the wall with his blood.

It serves as an opportunity to teach the Dissociative Disorders (DD). Much like the presence of the supernatural, demonic (fang teeth and three-fingered creature-like hands) shape-shifter is a chronic reminder of Derry’s sinister past, the DD are severe and persistent mental illnesses defined by a disruption or discontinuity in integration of consciousness, memory, identity, emotion, perception, body representation, motor control, and behavior (1).

Dissociative symptoms occur in the context of traumatic stressors as an attempt to maintain emotional equilibrium, but may result in distress and dysfunction. This is evident in many of the childhood characters in the story. For example, Ben is traumatized by the visions of his dead father (It) trying to lure him into the sewer plant. Eddie struggles with chronic medical illnesses for which he is taunted and harassed. Mike, an African American, has a difficult time transitioning as a new student because of racism and bullying.

In the second half of the story, the losers-as-adults return to Derry to battle the interdimensional predator. All but Stan suffer from severe Dissociative Amnesia, unable to recall the traumatic events of their childhood. They agree to split up and visit the old neighborhood in an effort to recapture their lost memories before It discovers their intentions and devours them. Despite suffering only mild dissociative symptoms, Stan’s completed suicide is a realistic depiction of the impact dissociative disorders can have; an increase risk in suicide attempts among those suffering from DD (2).

The catatonia that Bill’s wife Audra experiences after coming in contact with It’s “deadlights” is a sign seen in extreme cases of dissociation from trauma.