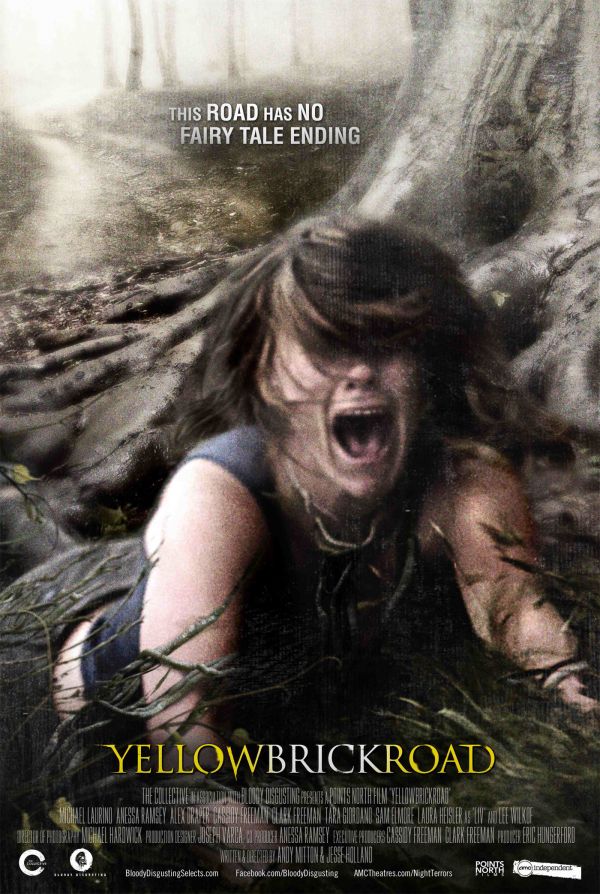 One morning in 1940, the entire population of Friar, New Hampshire disappeared. 572 people left behind all of their possessions and walked together up a winding mountain trail into the wilderness never to be heard from again. A search party dispatched by the U.S. Army eventually discovered the remains of nearly 300 of Friar’s evacuees. Many had frozen to death while others were slaughtered. Over the years, a quiet cover-up operation managed to weave the story of Friar into the stuff urban legends are made of. The town has slowly repopulated, but the vast wilderness is mostly untracked, with the northern-most stretches off limits to local hunters and loggers. In 2008, the coordinates for the “YELLOWBRICKROAD” trail head were declassified.

The first official expedition into the sick and twisted wilderness will attempt to solve the mystery of the lost citizens of Friar. The researchers’ hopes to turn a legend into an item of recorded history are jeopardized when their equipment fails; leaving them lost and at the will of what evil lurks in the woods.

THE PSYCHIATRY OF YELLOW BRICK ROAD

In our curriculum at Rutgers-RWJMS, we relate episodic illnesses (such as Delirium and Major Depressive Disorder) to ghost stories. In their quest for discovery, the ghosts from 1940 Friar will haunt a group of researchers, allowing for YellowBrickRoad to be discussed in the context of Delirium. Serial mental status examinations by Walter (a psychologist) reveal progressive cognitive decline in the group that is abrupt in onset. One researcher, Daryl, demonstrates alterations in cognition and consciousness incident to his discovery of a hat that bears a resemblance to that of Elphaba’s, but is more appropriately comparable to the (Mad) Hatter’s in Lewis Carroll’s novel Alice’s Adventures in Wonderland. The Hatter is a principal character who is portrayed as mad, asking unanswerable riddles and reciting nonsensical poetry. His reality parallels that of the expedition in that he is trapped in a never-ending tea party; time having stopped, keeping him and the March Hare at 6:00 pm forever. While the Hatter is portrayed as mad, the phrase “Mad Hatter” doesn’t appear in Carroll’s works. Instead, it refers to a delirium caused by mercury poisoning that can be traced back to the 19th century when mercury-based compounds were used to make fine hats.

In addition to serving as a case study of delirium “spread” through mechanisms of Shared Psychotic Disorder (versus mass poisoning), YellowBrickRoad also references Jungian theory by teaching the archetypal warning of “losing oneself in the wilderness.” This may be taken both metaphorically, as the characters stray from their own rationality, as well as literally. The original townspeople’s abandonment of Friar has less to do with what they were walking towards and more to do with what they were leaving behind and has its roots in manifest destiny. Accordingly, Yellow Brick Road should be viewed along with other rural gothic narratives such as The Shining (1980) and its own reference, the ill-fated Donner Party (1846’1847).