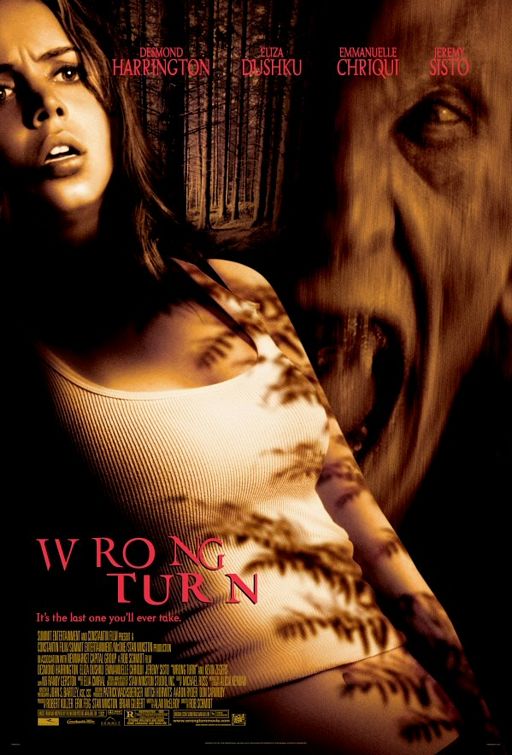 While it’s near impossible to mention “West Virginia’ and “medical student’ in the same
sentence without thinking about Morgantown (or Charleston), it’s the film’s rural setting that
allows for a sinister, if not prejudicial, backdrop for horror, with the archetypal, prosocial
warning to “be careful taking the path less beaten.” Scott even references Deliverance (1972)
despite that film being set in Georgia (he would have done well to check out April 3 on our
itinerary). While the history of the cannibalistic, half-feral, mutants is disclosed in subsequent
sequels, the following post is based solely on the original film.

THE PSYCHIATRY OF WRONG TURN

Wrong Turn serves to review the algorithm on how to diagnostically approach mental illness. The 3-step process includes ensuring that a patient’s chief complaint is not due to a) another general medical condition or b) the direct physiologic effects of a substance. The DSM-5 lists potential substances as medications, drugs, or toxins. Only after these are ruled-out should a psychiatrist c) attribute the patient’s symptoms to mental illness.

A. Rule-out Another Mental Disorder

As early as the opening credits, we are reminded of the effects genetics play in the predisposition of mental illness. Signs and symptoms such as “psychosis” and violent outbursts” appear in a montage of newspaper articles along with hints of the role of genetics.

B. Rule-out the Direct Physiologic Effects of a Substance

Immediately following the opening credits, we see Chris Flynn driving to Raleigh. The music on the car radio references whiskey, and serves as foreshadowing to alcohol’s influence on the plot. When his route is blocked by a chemical (toxin) spill, viewers are left to wonder if the highway is a corridor for the transport of hazardous materials and if so, whether previous spills are the cause of the mutants’ pathology. In this sense, Wrong Turn may be viewed as a rhetorical case study of a substance- or toxin-induced psychotic disorder. Soon after he crashes into the hikers’ truck, they refer to Fran and Evan as “stoners,” and Jessie calls Chris a “mule.”

Once A and B above have been ruled-out, psychiatrists will begin to formulate the most likely diagnosis based on current, recent, and past signs and symptoms. Since it’s established that the prominent symptoms are psychotic, our most likely and differential diagnoses will come from the Schizophrenia and Related Disorders chapter.

Since Wrong Turn is likely a case study of a toxin-induced psychotic disorder (choice B above), elaboration on a primary psychotic disorder is beyond the scope of this post. Interestingly, alcohol use also figured prominently in many adaptations of the blood feud between the West Virginia family, the Hatfields, and their Kentucky rivals (McCoys). Wrong Turn then is another cautionary tale in West Virginia folklore about the hazards of excessive alcohol use.