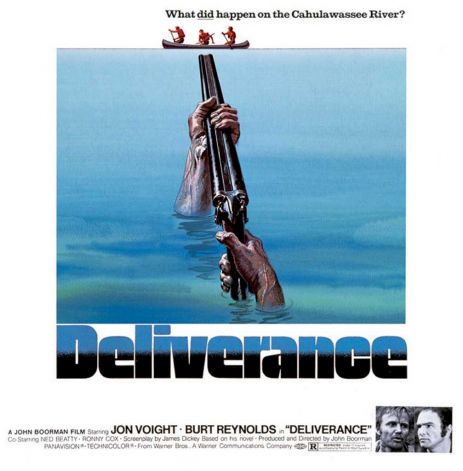 Based on a novel of the same name by James Dickey, Deliverance is a 1972 thriller selected for preservation in the US National Film Registry by the Library of Congress as being “culturally, historically, or aesthetically significant.” The landmark film depicts four Atlanta businessmen and their excursion into the Cahulawassee River valley where they become the objects of the nature versus civilization motif of the ages. Of note, we are posting this entry on Friday, April 3 (Good Friday; the day Dante Alighieri embarks on his journey through the Inferno).

THE PSYCHIATRY OF DELIVERANCE

Widely acclaimed as a landmark picture, the film is noted for 2 memorable scenes, the first of which
has one of the city men dueling on guitar with a country boy playing banjo. The early scene, which ends with Ed admitting defeat, “I’m lost,” sets the tone for what lies ahead; a trip into the unknown and potentially dangerous wilderness. Like many movies and literary works, Deliverance uses the journey to juxtapose the human element (city-dwellers) against nature (powerful forces of nature/supernatural). In this way, Deliverance parallels Dante Alighieri’s Divine Comedy (1320), specifically, the pilgrim becoming lost (like Ed) in the dark wood, and his journey into The Inferno.

The musical scene in Deliverance, then, is a warning to the urban pilgrims to “Abandon All Hope” (“All hope abandon, ye who enter here”). Perhaps the opening scene of the movie could read: Midway
on our their life’s journey, I four Atlanta businessmen found myself themselves in dark woods, the their right road lost. The setting of the film, the Cahulawassee River, parallels the Styx, with all of its hidden dangers. The dammed up river is the impetus for the group to pursue the river’s wild, and therefore conjures the leopard, lion, and she-wolf of the Inferno (symbolizing the executives’ sins which are about to merge with, if not cause, the danger that awaits them).

While Deliverance can be interpreted through the perspective of the group, the film may also be seen through the eyes of one of its core characters, Ed Gentry. In a second landmark scene – the rape of Bobby (“squeal like a pig”) – the audience has the shared perspective of Ed. Keeping consistent with the movie’s theme as their own private Hell Inferno, Ed appears to be the most even-keeled, the central character through whom everyone else is defined; i.e. Dante, the pilgrim (as such, the other characters each demonstrate traits upon which Dante Alighieri built his satire, see table 1). Unlike Dante, whose path to the mountaintop is blocked by the leopard, lion, and she-wolf, Ed successfully climbs the cliff near the end of the movie.