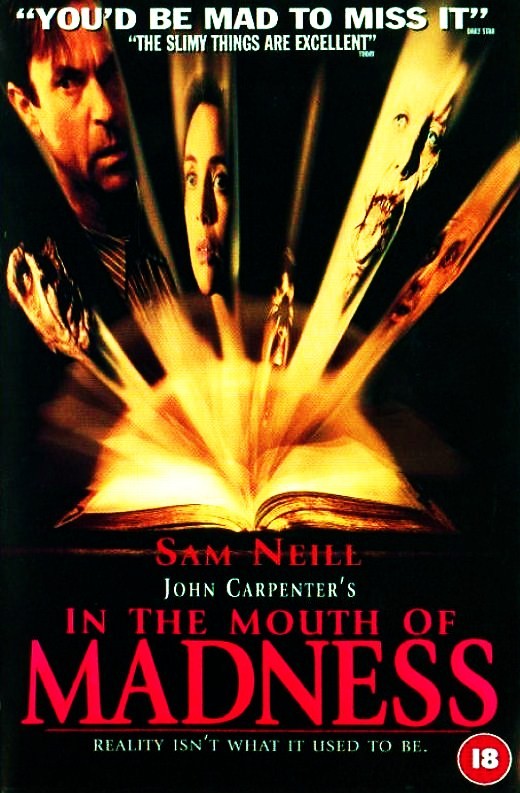 We go back-to-back today with John Carpenter’s In the Mouth of Madness. Considered by Carpenter to be the final piece of the apocalyptic trilogy preceded by The Thing and Prince of Darkness, In the Mouth of Madness is told as a patient history. Dr. Wrenn performs a psychiatric evaluation on John Trent who discloses his history of present illness (HPI) that culminates with admission to an inpatient psychiatric hospital (where the movie begins).

THE PSYCHIATRY OF IN THE MOUTH OF MADNESS

John Trent is an insurance investigator who was recently hired by Arcane Publishing to investigate the disappearance of Sutter Cane, an author whose novels are purported to cause acute onset of disorientation, memory loss, and paranoia in their readers. The effects fit a diagnosis of delirium, specifically disturbances in cognition (including attention, orientation, and memory) that develop over a short period of time. The disturbance is a direct physiological effect of a medical condition or a substance. Since we see through the perspective of Trent, a closer investigation may reveal the etiology of his delirium (did he give a urine drug screen upon admission to the hospital?).

Trent’s investigation leads him to Hobbs End, the fictional town in Cane’s novels. There, he finds Cane who reveals that they are all characters playing a part in a larger story, the last “chapter” of which is captured in his new novel aptly named In The Mouth of Madness. Cane also informs Trent that his fans’ belief in his stories have freed an ancient monstrous race that will overrun the earth (i.e. the end of the novel and therefore, their ultimate fate).

In viewing the film, one must consider that Trent used cocaine upon being hired while reading Cane’s novel “to research” his new client (the “altered” eyes and nosebleed of the reader killed by Trent are symbolic of cocaine’s intoxication effects). His intoxication “got him caught up” in the novel, where he was unable to differentiate fiction from reality. The cognitive deficits and perceptual disturbances that are pervasive throughout the film are the result of cocaine-induced delirium. Trent’s feelings of derealization and loss of time query the use of lysergic acid diethylamide (LSD). Along with cocaine, LSD has a sympathomimetic effect, so their concurrent use risks sudden cardiac death. Perhaps Carpenter’s theme of the apocalypse is a metaphor for the public health crisis and economic burden of drug use and heart disease in the US.