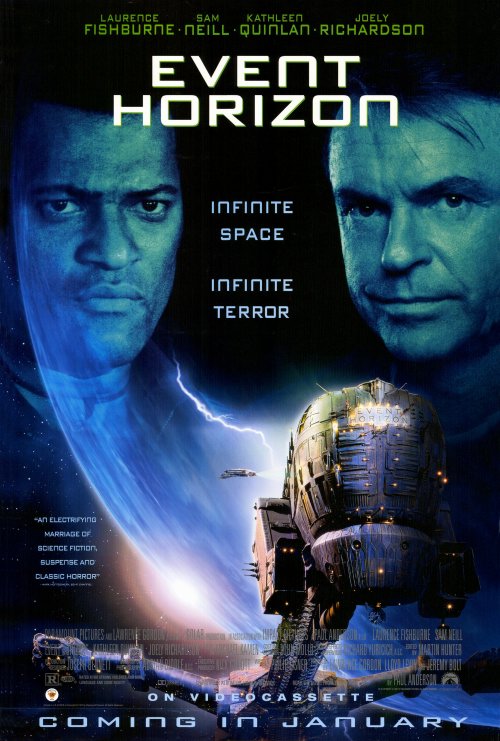 Why not start the weekend off with a Sam Neill double feature and have Event Horizon follow In the Mouth of Madness?! Taking place in 2047, Event Horizon depicts the events surrounding the ill-fatal rescue mission embarked on by the Lewis and Clark in response to distress signals dispatched by the Event Horizon, a ship that disappeared seven years prior. The vessel had ventured into an experimental flight to test a gravity drive, which if successful, would decrease the travel time between two points in the universe. Upon reaching the Event Horizon, many sinister events take place revealing the remnants of the crew from the previous mission. Slowly, the crew of the Lewis and Clark are pulled into the hallucinogenic trances of the Event Horizon with some of the lives of the crew being claimed. Desperate measures are taken to return to earth, which unfortunately prove futile.

THE PSYCHIATRY OF THE EVENT HORIZON

Among the most striking parts of Event Horizon are the hallucinations envisioned by the members of the Lewis and Clark. While hallucinations are often synonymous with psychotic disorders, general medical conditions and substance use must first be ruled out. In the film, it is possible that the hallucinations are due to delirium induced by hypoxia. Many of the hallucinations of the crew members began when they entered the Event Horizon and had less than a day of usable oxygen for the entire crew. The impact of being in stasis, perhaps complicated by electrolyte abnormalities (inadequate intake), could also have contributed to delirium. Of note, at the end of the film, Starck awakens from an over-two-month period of stasis with a delusion that Dr. Weir is impersonating one of the rescue workers. This particular type of delusion is known as the Fregoli syndrome (Weir can assume intermetamorphosis).

The hallucinations, in Dr. Weir’s case, could also be as a result of pathologic grief. While adaptive bereavement may include guilt over actions taken or not taken with the deceased while they were still alive, it is pathologic when the guilt becomes pervasive and debilitating. In Dr. Weir’s case, his pathological guilt over his wife committing suicide results in hallucinations of her insisting that he stay on the Event Horizon.

The character of Ensign Justin depicts the use of dissociation as a defense mechanism. After witnessing horrid images from the gravity core, he enters a catatonic state. When the catatonia resolves, he demonstrates Acute Stress Disorder, constantly reliving the images he saw. This leads him to attempt suicide. His means underscores the principle that men use more lethal mechanisms for suicide, as he tries to leave the ship without a space suit. It’s interesting that a crew member on a ship named Lewis and Clark would prompt a discussion of suicide, as its namesake, Meriwether Lewis, was found with two gunshot wounds at a roadside inn at Grinder’s Stand, Tennessee on this very date in 1809. He died the next morning on October 11, 206 years ago due to wounds from his suicide attempt.