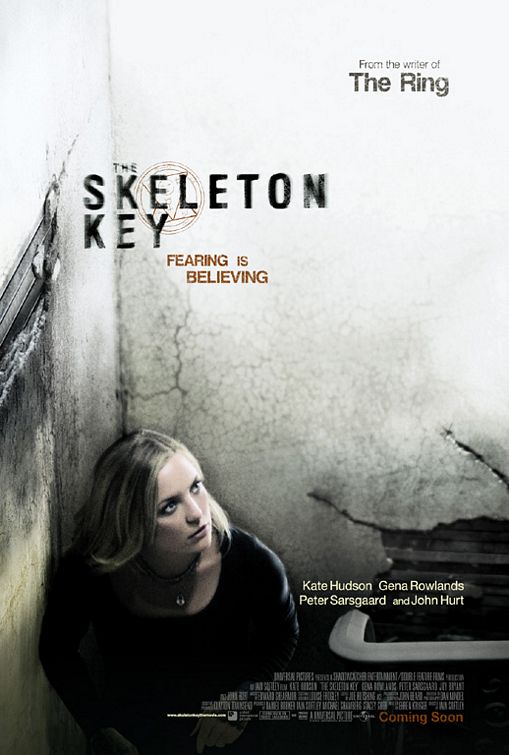 We must have had a mishap crossing the Ole Miss, the Ole Man (Vacation, 1983), because I mistakenly substituted Skeleton Key for Interview with the Vampire. Nonetheless, in the former, Caroline Ellis takes a job as a live-in nurse to care for Benjamin, an elderly man suffering from the effects of a stroke. Through Luke, an estate lawyer, Violet Devereaux hires Caroline despite appearing put off by her Hoboken-esque appearance. Despite getting off to a rocky start, Violet entrusts Caroline with Benjamin’s health, and gives her a skeleton key that unlocks every door in the plantation house but one; she’ll unlock this door with the key of her imagination (Twilight Zone, 1963).

THE PSYCHIATRY OF SKELETON KEY

Skeleton Key is a film that depicts hoodoo (root work); a culturally sanctioned belief practiced in the southeast US.

It can’t hurt you if you don’t believe” to the final plot spin when Caroline enters the conjure room in the attic. This is the only room in the house that cannot be opened with the skeleton key, and can only be unlocked with faith.

The film also serves to review Benjamin’s portrayed affliction; cerebrovascular disease, likely subcortical vascular dementia (SCVD). SCVD, also called Binswanger’s disease, involves extensive microscopic damage to the small blood vessels in the white matter of the CNS. Benjamin’s character is accurate in that symptoms tend to begin after the age of 60 in individuals with history of stroke. The characteristic features of Binswanger’s demonstrated by Benjamin include lack of facial expression and speech difficulties. The latter is captured in the curative spell conjured by Caroline, “His words have gotten lost…lost and wandering in his mind…”