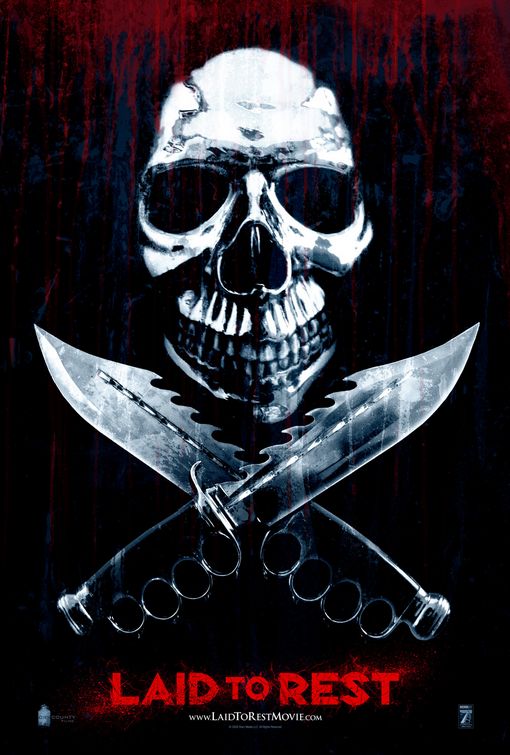 Laid to Rest is a 2009 slasher film depicting the “amnestic protagonist.” It follows a young woman who awakens in a casket with amnesia, and her attempts to recover her lost memories, the most disturbing of which is that she’s a victim of a serial killer who taunts the police by videotaping his victims.

THE PSYCHIATRY OF LAID TO REST

An unnamed woman awakens to find herself in a casket, without any knowledge of where she is or how she got there. In fact, she demonstrates retrograde amnesia, unable to recall any long- term memory (episodic or semantic). She complains of a headache, and appears confused as she tries to escape the mortuary and its video-taping, sadistic inhabitant, ChromeSkull.

Locked in the embalming room, she is nearly rescued by an elderly mortician with a “lazy eye” (cranial nerve palsy) before ChromeSkull impales him. We later learn upon discovery of one of the video tapes that Mr. Jones was an accomplice, Chrome Skull’s Renfield, who regained compassion for the girl before being killed in an attempt to rescue her.

Upon her escape, the woman flags down a lone passer-byer, Tucker, who refers to her as “Princess.” As the story unfolds, Princess’s psychiatric symptoms (amnesia) combine with Tucker’s physical deficit (impaired gait) to derail their multiple attempts to reach safety.

Finally, we discover that ChromeSkull is a psychotic serial killer who has been abducting young women beginning in south Florida. He posed as a “john’ to abduct Princess, a prostitute who is seen on a video tape snorting cocaine just before being assaulted with a baseball bat (and ending up in a casket). While the details of Princess’s history explain her recent experiences including the headache, an alternative interpretation (scar notwithstanding) allows for an interesting psychiatric synopsis.

It may be reasonable to assume that Princess likely abused alcohol in addition to cocaine. Taken together, Laid to Rest may be interpreted as a case study of Alcohol Withdrawal, which can be reviewed in 3 phases. The first phase, uncomplicated withdrawal, results from cessation of alcohol thats use has been heavy and prolonged. Interestingly, the one criterion from the Clinical Institute Withdrawal Assessment (CIWA is the gold standard for symptom-triggered therapy) that is not included in the DSM-5 diagnostic criteria is headache.

The second phase, complicated withdrawal, is hallmarked by either seizures or hallucinations. The latter may be due to a) Alcoholic Hallucinosis or b) Alcohol Withdrawal Delirium (Delirium Tremens, DT’s). The third phase, Wernicke-Korsakov syndrome, may begin with a triad of confusion (Princess), ataxia (Tucker), and eye findings (Mr. Jones). If left untreated, Wernicke’s encephalopathy (confusion) may evolve into Korsakov psychosis (KP). KP is a likely irreversible neurologic syndrome characterized by amnesia (while Princess demonstrates retrograde amnesia, KP more commonly presents with anterograde amnesia/difficulty with encoding new memories), confabulation (the creation of false memories), and perceptual disturbances (psychosis). While ChromeSkull may represent “a psychotic serial killer,” he may only be a figment of Princess’s imagination; a product of her delusional belief system resulting from years of alcohol abuse and subsequent Wernicke-Korsakov syndrome. While the 3 forms of alcohol withdrawal are presented here as 3 distinct phases, they need not appear in any particular order. As confabulation is not depicted in the film, so too may alcohol withdrawal not include specific symptoms..