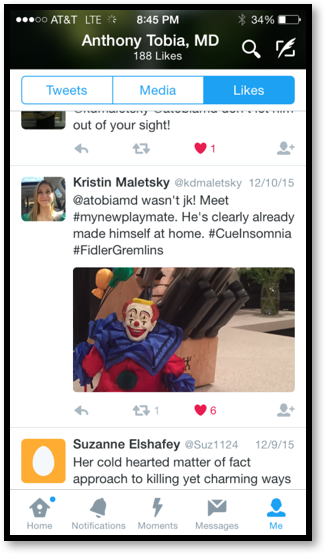 On Thursday, December 10, 2015, a medical student at a university in central New Jersey arrived home late one afternoon and found a package on her doorstep. She didn’t give it much thought, having had packages delivered for the past few weeks of the holiday season. So she picked it up and brought it into her house with the mail.

After she finished dinner and cleared off the table, the package remained where she had laid it. Preparing to watch Gremlins, she took the package into her living room and started the movie. Midway through the movie, she went to the kitchen to get a snack. When she returned to her living room, the package was inexplicably opened and its contents disappeared. Frozen, she shuttered when she saw the package’s resident staring at her from atop the kitchen counter.

When she awakened on the floor hours later, her new playmate was gone. Next to the knives on her counter was etched “TOBEY.”

Who is Tobey? What did Tobey want? If you mention his name on campus, students won’t speak of him. Yet, there’s no shortage of tales about the clown’s mythology.

One tale is that Tobey is a reincarnation of the urban legend of the Clown Doll. A rendition of the myth titled The Story of Gladys’s New Playmate is told by a course director in a curriculum that repeats every six weeks. Because he deviates from the original story, the professor curses one of his students to experience a home invasion by the evil jester. Tobey has two letters mysteriously appear on him and searches for the marked student with the matching initials. The doll’s message is a prohibition against manipulating the tale for one’s own purposes.

Whatever his motive, Tobey shows up at a student’s doorstep every six weeks and then inexplicably disappears only to return again with his recurring albeit clandestine message.