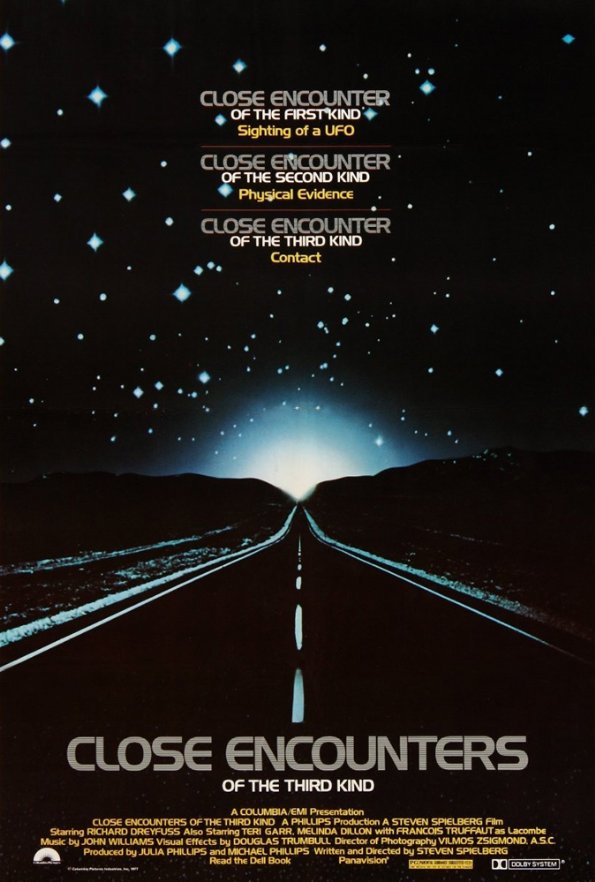 Close Encounters of the Third Kind depicts the events of Roy Neary, an electrical lineman, who experiences an irresistible impulse to visit an isolated area that he receives in a vision after an encounter with UFOs. In planning our 52in52 itinerary, I should have visited Wyoming before Montana (Alien Abduction: Incident in Lake County, 1998) to have remained loyal to J. Allen Hynek’s classification of close encounters with aliens. In ufology, the 3rd kind of encounter is defined when an animated creature is present while the 4th kind is an event in which a human is abducted as the McPhersons were in Week 12.

THE PSYCHIATRY OF CLOSE ENCOUNTERS OF THE THIRD KIND (1977)

Two iconic monsters that represent our culture’s fear of the unknown are the Zombie and Alien Beast. While zombies relate to Mood Disorders (but we’ll have to wait 2 weeks for The Crazies), this week’s film highlights aliens and their role in reviewing Bipolar and Related Disorders.

We are first introduced to Roy Neary and his family around the dinner table during a discussion of their planning a family event. Roy’s insistence on seeing Pinocchio is characterized by irritability and verbally abusive language. While we aren’t provided a recent history that allows us to determine if his behavior is a change from previous functioning, the events that will unfold will frame this early scene as a prodrome to bipolar illness.

Following a close encounter with UFOs (rule-out perceptual disturbance) while in his truck, Roy’s behavior becomes erratic, and results in significant impairment in interpersonal (his wife and children leave him) and occupational (he is fired from his job) functioning. Initially, he becomes obsessed with a vision he receives. His belief that he must visit an isolated area in the wilderness to see something spectacular becomes fixed. His grandiose delusion is initially mood-incongruent when he experiences a major depressive episode culminating in his crying inconsolably in the shower. Thereafter, Roy switches to the opposite pole and manifests grandiosity, a decreased need for sleep, pressured speech, and an increase in goal-directed activity in constructing an 8-foot replica of Devil’s Tower in his living room (the precipitant for his wife leaving him).

It is unclear to the audience if the people Roy meets who confirm his reality are themselves products of his own mind. When such is the case in film, it’s interesting to uncover aspects of the movie that are physically impossible, therefore supporting the notion that only in one’s mind can the events be explained.

Type I error: Supporting a diagnosis of Bipolar Disorder
Type I error (interestingly called error of the first kind) is the conclusion that a supposed effect exists when in fact it doesn’t. In the climactic scene at the end of the movie, the alien mothership flies over Devil’s Tower. We see the ship’s shadow creeping along the ground despite the fact that there’s no light source above the ship. Similarly, when the brightly lit alien mothership passes directly over Devil’s Tower, the rock formation remains dark despite having the leviathan light source directly above.

Type II error (almost): Supporting a diagnosis of Bipolar Disorder
Type II error (interestingly called error of the second kind) is the conclusion that something does not exist when in fact it does. For example, Roy’s joining the aliens is critical in realizing that his behavior is significantly impacted by his delusions. Despite this, Spielberg has expressed that if he were to make the movie over again, he would delete this scene. Additionally, Spielberg intended to cut the entire manic (garden) episode from the Special Edition despite it arguably being the most defining scene in the movie.