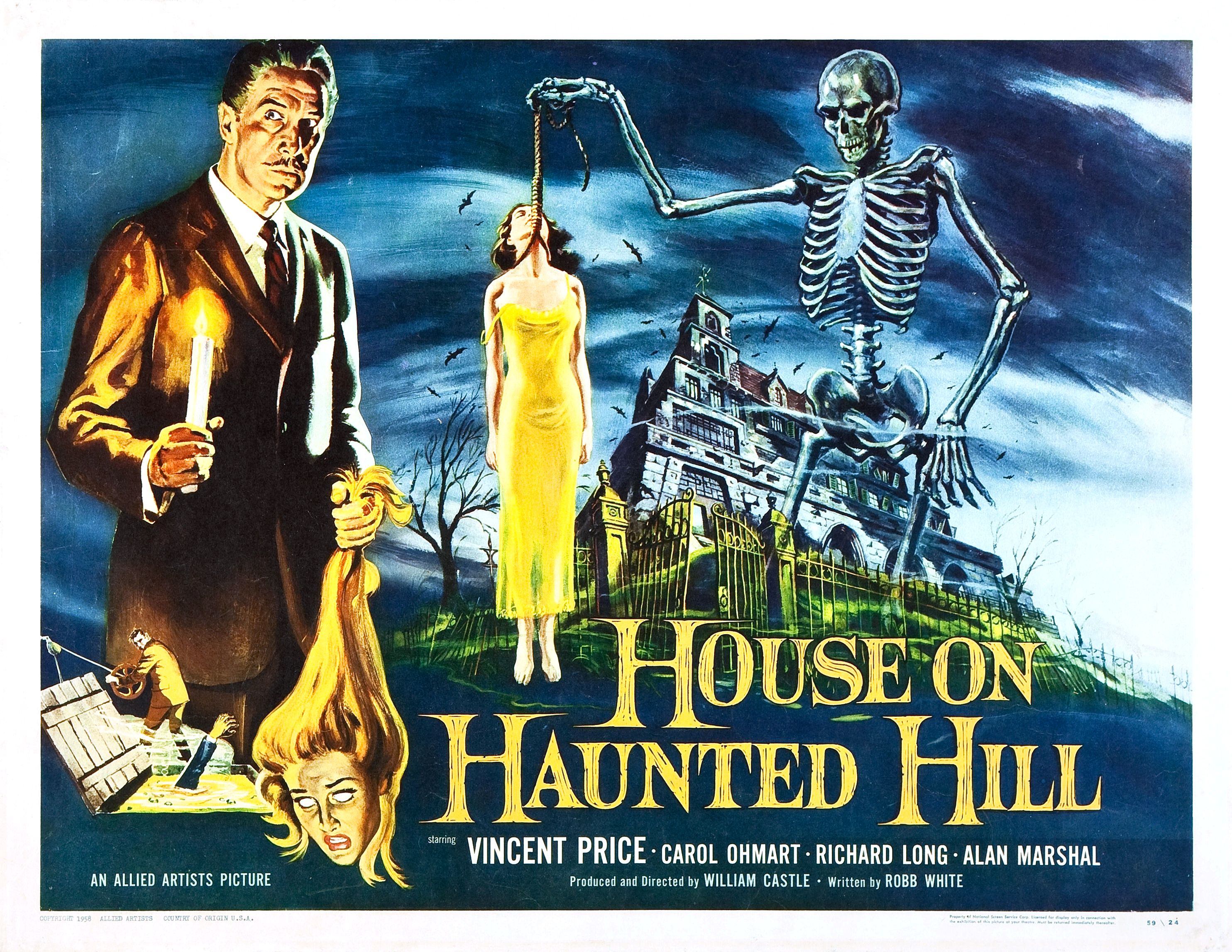 On this date in 1993, we lost arguably the most iconic actor in the world of horror when Vincent Price lost his battle with lung cancer. Price starred in numerous classics including House of Wax, The Mad Magician, The Fly, Return of the Fly, House on Haunted Hill, and The Tingler. Today marks the 22nd anniversary of his death and in honor of his work, we at Rutgers Robert Wood Johnson Medical School; review the House on Haunted Hill (1959).

Considered an American horror classic, House on Haunted Hill is a film that depicts a haunted house party, where the goal of the festivities is to survive a night of ghosts and spirits. Frederick Loren, an eccentric millionaire, and his fourth wife, Annabelle, invite five “strangers” to stay in an alleged haunted house with the award of $10,000 for each individual that survives the night. As the night progresses, the ghosts make their presence known to each of the guests. However, it is revealed [Spoiler Alert] that these events are an elaborate scheme for Annabelle and her secret lover, Dr. Trent, to stage the perfect murder. What they don’t know is that Mr. Loren is also playing along in their little game.

THE PSYCHIATRY OF THE HOUSE ON HAUNTED HILL

Several characters in the film provide salient teaching points on the multi-axial system from the DSM-IV criteria used to assess a patient in the clinical setting.

Axis I: Post-Traumatic Stress Disorder
Watson Pritchard, the house’s owner, provides an example of a patient with axis I diagnoses; suffering from Post-Traumatic Stress Disorder (PTSD), psychotic features, and Alcohol Use Disorder. At the beginning of the film, Watson stated there were seven deaths in the house, including his own brother, and that the one time he stayed in the home he was found the next day “almost dead.” These traumatic events provide the foundation in support of the diagnosis of PTSD. Watson’s interactions with the other guests illustrate the symptoms associated with PTSD such as his irritability, difficulty concentrating, and hypervigilance. As the film progresses, Watson begins to display stress-induced psychosis evident by his paranoia which leads him to display abnormal behavior and delusions about the house. He is seen walking around the house with a knife, staring at Mrs. Loren’s body to see if the spirits will take her, and sitting in his room with a cocked gun pointing to the door. Even after Frederick Loren confessed that he had killed his wife and her secret lover, Dr. Trent (after they had planned to kill him by driving Nora “into hysteria”), Watson remained fixed in his belief that ghosts and spirits were responsible for these events. Additionally, Watson is seen drinking alcohol throughout the night to the point where Mr. Loren becomes concerned about his consumption. Alcohol and/or substance use disorder is often seen co-occurring with PTSD and can worsen the severity of a patient’s symptoms.

Axis II: Antisocial Personality Disorder
As the host, Frederick Loren demonstrates traits of Antisocial Personality Disorder. At the beginning of the film, Mr. Loren is approachable and charming to his guests. He offers them beverages, sides with their observations, and listens to their concerns. However, when alone or in the presence of Annabelle, Mr. Loren displays irritation, aggression, and a lack of concern for the dangerous situations in which he places his “guests.” This ability to use empathy to manipulate and fulfill his own needs is a great illustration of sociopathy. Additionally, Mr. Loren shows no remorse for the killing of Annabelle and Mr. Trent, and in fact displayed a level of sadistic pleasure during the act. Robb White’s decision to make Mr. Loren a millionaire CEO is interesting; as such traits may be advantageous in vocations requiring cunning and control.

Axis III: Head trauma (Delirium coded on Axis I)
Lance Schroeder, a test pilot, provides a great example of a psychiatric disorder due to the direct physiological effects of a general medical condition (GMC). Lance decides to investigate the many cellar doors in the house. As he enters one of the rooms, he is forcefully pushed into the room with the door locked behind him. When the guests come to save Lance, the door easily opens to find him unconscious with a head laceration. Lance’s physical trauma contributes to his psychiatric state. After Lance’s head trauma, he indicates that he is experiencing confusion about what had happened to him in the cellar and then displays several moments of agitation and irritability, particularly towards Mr. Loren. A GMC such as head trauma likely influenced his altered mental status. This can be seen as changes in a person’s behavior, thought process, or level of orientation.

Axis IV: Financial Stress
Nora Manning, an employee of one of Mr. Loren’s companies, shows how life stressors can affect a person’s mental health. When Mr. Loren is introducing the audience to his five guests, he indicates that Nora is in need of the ward because she financially supports her entire family. In a stress-diathesis model, her psychosocial stressors precipitate what Dr. Trent calls “hysteria.” Dr. Trent and Annabelle were aware of Nora’s weaknesses and use her situation to drive her to killing Mr. Loren.

[Spoiler Alert] Since she kills the film’s antagonist, we’ll formulate a global assessment of functioning (GAF) score for Nora. The GAF score, which is documented in axis V of the assessment, gives the clinician insight on how a person’s biological, social, and psychological processes affect their capacity to function. Nora’s stressors and the brief psychotic disorder from which she suffers in the house make her GAF score low, indicating that she is at risk of hurting herself and/or others, which is evident when she shoots Dr. Loren in her “hysterical” state.